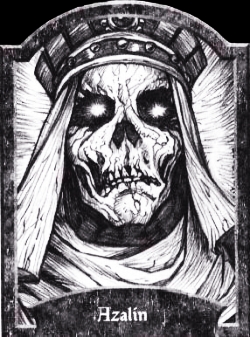 I’ve been slowly starting a reputation of running strange campaigns and out-of-the-box characters in other people’s D&D games. From my previous one-shot session of creating a Wish Spell‘d world where cultists were committing suicide trying to undo a reality change to having plant people in campaigns, I’ve run some strange sessions. However, my latest weird comes from a character I created for a friend’s game called John Brownstone who recently, well, died. Sort of.

After talking with the DM on who would be in the game and how they were approaching their characters weeks ago, I proposed something I considered pretty audacious: what if I was a True Polymorph‘d creature turned into a “hero?” What if, I proposed, I was actually a villain but my character didn’t remember it? What if I was actually a high-level Lich who had been turned into a young human man? In a very Human Nature-styled idea, what if I didn’t want to go back to my old life? How would that work?

In conversations about John Brownstone, we decided that he would not be ‘evil’ and would, instead, be a bumbling wizard with a strong, but unconscious, masochistic streak. Whenever possible, he would be seek to damage those around him and even himself in an unconscious pursuit to break the polymorphed state. Basically, we decided, he would have to die. Somehow.

For a first few sessions, this went fine. As a Level 1 wizard, I chose some unusual spells. Create Bonfire. Command. Nothing actually overtly offensive. This meant that the other characters, who were playing what I would call as “evil lite,” kept getting mad with my character. He didn’t know anything about the world. He couldn’t really use spells. His main weapon, and I was particularly proud of this, was a literal “Magic Stick” with a 1d4-1 attack where he could actually do zero damage. He was, in a word, useless.

Then he was knocked unconscious.

While not ‘dead,’ the DM and I decided that his other ‘life’ would start to leak into his character. He would get headaches and blackouts. If additionally damaged, he would revert for a few hours and start attacking people. This last qualification become incredibly important because, as the story would have it, we arrived at a town and went to the local inn to rest for the night. This is where things went bad for the town, as I started to whisper what was going on to the DM while the other characters were talking.

John walks out of the inn.

He finds himself outside the inn. He grabs at his head at pains increases until he passes out in an alley. Moments later, he gets back up, dusts himself off, and seeks out a victim.

“John” walks in silence through the town, moving down the alleys and watching people laughing through windows. As he considers one person after another, a smile plays in his lips. “Not yet,” he whispers to the dark and moves again.

He make his selection. “Yes,” he whispers, part in relief and part in pleasure. His hand resists slightly as he raises it. A faint darkness gathers to his hand and he reaches out and points. A black beam extends and claims the victim. They scream, but only for a moment.

As a Lich, “John” had access to both Power Word: Kill and Disintegrate. Each new night, as the spells refreshed, he would blackout and then go out and kill people in the town. Once the morning came, another person would be dead or turned into a zombie. And after two days of this, the party was starting to freak out. The longer they spent in town, the more people died. The more panic started to rise. After all, “John” didn’t know he was doing any of these things, and didn’t remember blacking out each time, either.

Since we were playing in the Mines of Phandelver campaign (after playing a few sessions in a one-shot), the party decided to go ask Agatha about the “undead problem” that was developing. Upon arriving in her grove, she instantly said that there was an undead in the party. (Which led to this hilarious exchange.) After arguing about who it might be and if she was lying, two of the party decided to test this through using Spare the Dying on each of us. Since it wouldn’t work on undead, they wouldn’t come back from their “death.”

After getting knocked out, but importantly not brought into the negative, I was questioned but not considered the undead member of the party. But then, after a second round of testing and getting knocked out again, I decided to run for it. John, in his human form, didn’t want any to do with harming party members. And then he was killed while running away.

After dying, I switched character sheets and came back as a Lich, rising from the ground and shocking the party. As now Azalin Rex (which I borrowed as part of some research into the Ravenloft setting for a future campaign), I knocked around the party some using a watered-down version of Disrupt Life (1d4 instead of 6d6 each time). Then, once I had I taken 30 damage after a few rounds, I used Plane Shift and went to the Shadowfell.

I was now a villain the party had created through killing my “human” character, another party member. Something, as the DM and I discuss this latest change, that will probably come back to haunt them in a major way later in the story. You don’t just unleash an evil on the world, one who had already killed three people in the town they just left, without looking suspicious and Lich himself making plans to destroy them at some point.