Picking up where Halo 2 left off, its direct sequel, Halo 3, continues the journey of Master Chief  without his constant companion of Cortana, a feminine artificial intelligence. Having lost her in the battles in the previous game, Master Chief must recover from his crash landing on Earth, band together with new allies, and fight off the seemingly imminent end to all life as The Flood makes it way deep into the forgotten technology now triggered to obliterate all life in the galaxy. Moving from one battlefield to another, Master Chief eventually must try to recover Cortana and her knowledge while all sentient life hangs in the balance.

Yet, for its bombastic scale of a galaxy on the edge of destruction, Halo 3 challenges the construction of the self of its protagonist Master Chief in an unexpected way. Positioned as the ultimate cypher for player projected military fantasy, the overtly masculine Master Chief falters in Halo 3. Without Cortana, his seemingly inner voice of morality and navigation, the screen flickers and glitches. The player, embodied in the view of Master Chief, is constrained and stopped. Without Cortana, Master Chief is not a complete self. He can still fight, yes, but he conflicted and lost. Still following orders, he hallucinates constantly and is plagued with images of Cortana and any messages left for him.

Frequently, the pair, Master Chief and Cortana, are seen as a group working together: one the source of opening and of creating pathways, Cortana, while Master Chief is the agent of destruction and of brute force, killing all enemies before him and as driven by the player toward greater acts of violence. Balanced in their way as archetypical masculine and feminine forces in the series, the missing part of Cortana in much of Halo 3 points to the metaphoric castration of Master Chief despite the larger weaponry introduced in the game. Without Cortana, he clearly cannot function.

Opening on the need of Master Chief to go after Cortana and recover her from The Flood, their first appearance in the series and their defining movements are shown to the player first hand as the threat makes itself known. As an infected ship crash-lands on Earth, The Flood starts infecting people and their nature as parasitic aliens capable of taking over and transforming hosts is shown as forces, both allied and otherwise, are converted into monsters Master Chief fight through as their label becomes the manifestation of their naming: they are like a ‘flood’ that comes pouring onto a world. Fighting across a base and then to the crashed ship, Master Chief must enter this den of infection to recover his lost feminine self/ally, Cortana, who is somewhere inside.

Harkening back to earlier science fiction foes like the xenomorphs from the Alien series, The Flood are shown as larva that infect and transform, giving birth to creatures both like and unlike their hosts. Shown in similar body transformation animations and actions highly reminiscent of Alien movie where a creature comes bursting out of a body, The Flood represent both an unstoppable force and one which consumes as it proceeds, not just conquering through a more masculine sense of singular penetration through violence, but a twisted femininity that also gives birth through this penetration at the same time.

Writing of the movie Alien and of the way in which the archaic mother is encoded within the sense of cinematic construction of the narrative, Creed (1993) writes in The Monstrous-Feminine: Film, Feminism, Psychoanalysis of the fear invoked by the xenomorph: she is an embodied castration, one which can “tear apart and reincorporate all life” (p. 22). This is, in the terms of Creed (1993), the horror of the cannibalistic mother after the crew in Alien. Their foe is one that seeks to consume them into a new self and give birth to greater horrors that can also seek out and give birth themselves. They are a living abjection that haunts the womblike silent ship in which the crew of the Nostromo must combat this threat. 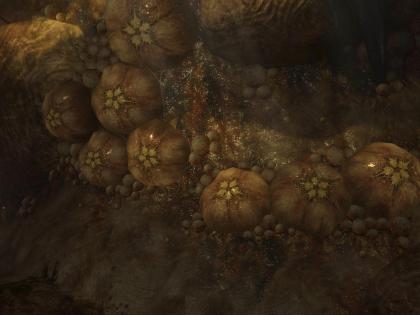 Proceeding into his own wet, womblike environment, Master Chief enters the crashed ship Indulgence of Conviction now nearly taken over by the organic infestation clinging to walls and floors. Transformed through its own inner infection of The Flood which now controls it, Master Chief must venter deep into this silent place, attacked by creatures ruled by The Flood and pitted against both environment and those he must battle in pursuit of Cortana that is locked away in this place of total abjection, yet one in which Master Chief, and the player herself, is compelled to explore at length to find their way to Cortana.

The Indulgence of Conviction, as base for The Flood, also contrasts with the clean, smooth construction of all other technology in the current and previous games in the Halo series. Instead of the curves of The Covenant ships; the hard, flat angles of the military design of the human technology; or even the grandiose forgotten buildings of the Forerunners, The Flood are organic, messy creatures, ones which seem to consume and control rather than build. Placed in direct visual contrast, the armored, high-technology of the Master Chief as both an engineered body in an even more constructed armored suit, stands apart from The Flood as contradictions and monsters. Rather than the height of masculine focused design in the body of Master Chief, The Flood is twisted femininity.

For as direct contradictions as The Flood and Master Chief appear, it is the presence of The Gravemind, a masculine voice, which presents the most present form of interaction beyond the battling of corrupted bodies. Projected as a forceful voice in the head of Master Chief, the player is frozen in place as The Gravemind speaks and warns, in Halo 3, that Master Chief is not welcome in Indulgence of Conviction and will be attacked as he makes his way through the remains of the ship and closer to Cortana, who is believed to be somewhere in all the organic debris.

Such a voice in the entity of The Gravemind serves as a counter-balance to the penetration of Master Chief toward his feminine other, Cortana, as the source of the same visual and movement constraints as the previous interruptions of Cortana’s messages and memories were in previous moments in the game. In the same way in which Cortana can freeze the player’s progression, The Gravemind now takes on this role, speaking both for and as the archaic mother of the ship itself and as the entity composed of the consumed bodies from those on the ship itself. The Gravemind is both, in this instance, the womb and the mother, yet not presented as either in the embodiment of a masculine, commanding voice against the pursuit of Master Chief as controlled by the player.

Finding what is presented as Cortana within the body of the ship, Master Chief must then set explosives and run out of the ship before the enemies are destroyed behind him. Sent in as an invading force, the player must now fight out again while under a time limit and against forces that live up to their title, sending waves of enemies against Master Chief as he makes his way from the very belly of the womblike, inner cavern in which he sets the engines to explode back out a different entrance. And it is while he is fleeing, that Master Chief, the Cortana flashes now stopped, that The Gravemind voices continues, re-contextualizing the now included, feminine within the body of the player as a masculine voice threatens violence against a masculine body as the feminine cavity is cast back into a technological threat.

The in-game mission into the Indulgence of Conviction succeeds in the recovery of a message from Cortana. Master Chief is again successful and his enemies are left dead and dying behind him. Yet, for as cast in militaristic overtones as this is, it is also the death of the femininity of The Flood in Halo 3. After this point, after Master Chief has invaded the sacred of The Flood and taken his own feminine self/ally back, The Flood are cast as a threat in technological settings and ones from which their defeat is only a matter of the amount of bullet and laser penetration. The recovery and re-integration of Cortana marks the turn in Halo 3 of the threat of The Flood. Technology, as shown from setting off the engines of the ship to the later use of halos, is safety reinstated for the player and cosmology of the world.

For a single mission into the Indulgence of Conviction, Master Chief is not just another instance of technology fighting other entities also using technology, forever exchanging loyalty and battles over space, but is surrounded by the horror of the twisted feminine in the form of the organic walls and creatures fought in the ship. He is cast, yes, as the savior of the galaxy, but one in which even he cannot function without the inclusion of the feminine in the form of Cortana, but from which Master Chief must also dominate the feminine other so completely as to enter, fight, and destroy it in order to restore his own self.