Chrono Cross remained, until a few days ago anyway, a game I thought I never would finish too, having started it multiple times in the past. Each time, I would play for a few hours, a couple of times even making it nearly to the end, but would inevitably get really frustrated and stop. Every time, I would come up against a battle I couldn’t figure out how to win, die a bunch of times, yell a lot at the game, and then swear off ever playing it again.

Part of my problem (other than the anger issues), and that of many other people too I imagine, is that it is a sequel. If you really like Chrono Trigger (and I do), Chrono Cross is pretty close to a negation of everything you might have loved from the previous game. The world is different. The battle system is radically different. The rules you knew are gone, replaced with bizarre new ones. And, if that wasn’t enough, all of the characters you might have grown attached to are now long dead or — *spoilers* — have been completely erased from the current timeline. It is a major departure from nearly everything of Chrono Trigger. 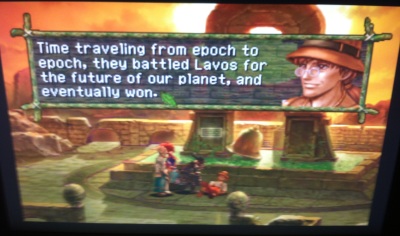 If you are not well-versed in the lore of Chrono Trigger, you can easily miss the early connections between the games too. There are names for armies and places shared between the games, sure. Some peripheral characters from the first game do show up again, the Prophet of Time being a frequent example, but the major characters, the ones people love and spent the most time with in Trigger, are reduced, at the very end of Cross, to exposition dumps. One, Lucca, even points out how crazy the plot, which includes some select events from Trigger, has gotten by the end of Cross. Between dimensional hopping and time travel, nothing really makes sense anymore.

Which is the problem, I suppose. In making a sequel to a game so many, many people love, there was bound to be some complications. Even those games that use the same collection of characters and places from one game to another run into continuity issues. Some players might have seen events others didn’t. Play styles from the first game might have created narratives that the sequel no longer supports. Then, of course, there are numerous plot tangles inherent in trying to tie together a game like Trigger that has multiple, conflicting endings as well. Which ending is the “real” one ?

So, there is a great deal of sense of looking at all of those threads and deciding not to use any of them. Instead of trying to pick and choose when the final battle took place in Trigger, an issue rather important in a time traveling game, they just stated that it did. The “Big Bad” of the game was stopped and time flowed forward as a result. The dystopian future of Trigger became a thriving utopia for humanity in Cross. Things changed.

In any other game, such a move would be good. Improving lives by changing events through time travel would be a success. In defeating a powerful enemy responsible for so much death, the characters would be praised as heroes. Good job, those people.

Not in Cross. As the game goes to great lengths to point out, mankind — oh, yes, the game is deeply misogynistic too — is terrible. By trying to play god, some future group messes everything up for everyone across all time. They tried to govern everything, including Nature (capital ‘N’), and were more or less annihilated for their hubris, thus ushering in the events of Cross.

And that is the central paradox. The apparent theme of Cross is one of restoring balance to the universe. Recruiting people, and there are a ridiculous number of possible party members, includes breaking them from bad and hurtful patterns. In acquiring their best techniques, you must bring families together and help heal broken relationships. Togetherness and cooperation between all groups of peoples are the solution to all story-lines. Even the in-game music is full of orchestrated harmonies.

Yet, the game revolves around death and that same heavy-handed control it seems to be against. Because one person was “supposed” to die, others get hurt. In changing the timeline in Trigger, millions if not billions no longer exist as a result. All of the consequences for messing with Nature end badly for most involved. Trying to enforce your ideology on others is a bad idea and you will, at some point past or future, be punished for it.

That is, you will be punished unless you are the playable characters. If some small part of Cross is showing that all events, including changing them in time from Trigger, have tragic consequences for all involved, it fails to enforce its own message on its characters. They get away and, in fact, become the “arbiters” (a term the game itself uses) for what is “right” and how the timeline “should be.” 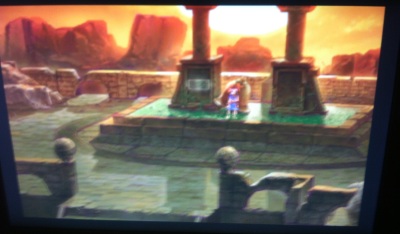 Certain people should die. Others should live. All that has been arranged should come to pass.

For all the pain Serge sees through the game, and there is a great deal, he must “reset” things to way others tell him it “should be.” His path is one of a skewed balance. If you kill off certain animals, an early lesson goes, it can ruin a local ecosystem — quick, murder this thing! Changing time and dimensional events are bad, the game shows over and over again, and then puts you into a situation where you are potentially erasing your existence and that of a whole other dimension as a result.

Cross really wants to present a situation where choices can be weighed and, perhaps, a lesser evil picked, but then undercuts even the decision itself as ‘playing god’ and going against Nature. Harmony is best, it repeats, and then prompts you to kill the next thing in your way. Mankind makes bad choices, it says, as it provides you with the opportunity to show your ruthlessness.

It’s prequel, Trigger, is a game of paradoxes, that is true. Most of the time travel doesn’t quite work out. Some things can be changed. Others are fixed. There is very little reason behind it other than for story “necessary” reasons and the inability for the game to account for an infinity of outcomes.

Yet, Cross, in trying to get away from the traps of Trigger, falls right into the biggest issue of the first game, that of conflicting purposes. Lavos, it points out in Trigger, is “bad” for trying to force evolution of one species over another. It uses the planet for its own ends.

With its upped stakes of “all of spacetime,” Cross shows this same paradox though. Forcing change on others is bad; here, take this weapon, this cross, and change everything “back” to how others tell you it “should be.” Using the planet for your own ends is not a good idea; here, manipulate entire islands and destroy another world. Messing with time can have major consequences, often bad ones; here, travel beyond time to kill something for me.