HTML5 audio is rather messy at the moment. While there are standards in place, and the Web Audio specification is supported in both Firefox and Chrome as of their latest versions, the licensing issues surrounding the file formats themselves prevent some browsers from playing them. To achieve some manner of cross-browser support, you need to test for Web Audio support, if you want access to its advance features, as well as which file formats, dictated by the browser, the operating system, and sometimes even the hardware involved, can be played. Luckily, there are several JavaScript libraries out there right now which solve some, but not all, of these issues.

For this post, I’m going to cover a library I’ve used in the past and generally recommend: Howler.js. It has good testing for the majority of file formats most platforms use and presents a simple interface for doing basic audio tasks.

To use it with Twine (and other HTML5 projects), though, we need to be aware of the following issues:

We are also going to use a technique that comes with the ability to be abused, so I am giving this warning right here: dynamically loading JavaScript in Twine, as I will demonstrate, is a potential security risk. Make sure you know from where the file or library comes from and that you trust the source.

(Note: I won’t be covering how to create audio files or convert them to different formats in this post. However, if you don’t already have it, I highly recommend Audacity for recording. It also has the ability, through File -> Export, to create OGG, MP3, and WAV files too. And if you have FFmpeg installed — requires separate download — it can convert files to M4A as well.)

The first step will be to create a new Story in Twine. Do that now. Then, go ahead and save it in a known location (as we will be using its folder in just a moment).

Next, we will need to get the Howler.js code itself. For that, visit here. 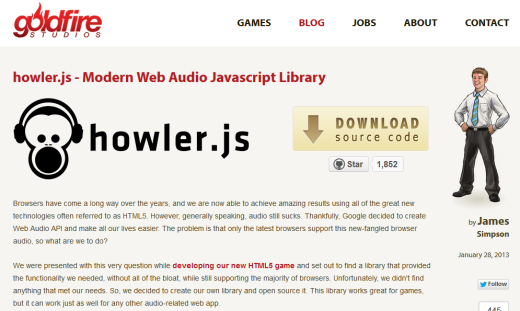 On the right hand side, there will be a link to “Download ZIP.” Do that.

Copy the “howler.min.js” source to the folder where you saved the Twine file.

In the first, copy the above code. It is what will dynamically load JavaScript, including the Howler.js library.

In the second, copy this next above code. It is the macro that will be called whenever a sound should be played.

It creates a single instance of a Howler object, with the sources passed to it from the calling passage, and once it loads one of the files, plays it immediately.

To actually use all this code, we need to make sure the following condition is met: the “loadJS” macro, with the argument to load the Howler.js library, MUST be called before the “playAudio” macro.

So, one method might be to create a passage with a single line that calls the “loadJS” macro. Then, within the Start passage, have the “display” macro call this other passage.

Finally, to play a sound file in another passage, we simply call the “playAudio” macro with the parameters of the file and its associated different formats. Howler.js will load the first supported type and play the file.