[Spoilers for DmC, including the ending and major plot points.]

One of the initial images promoting DmC was of Dante surrounded by angelic women in the foreground of a party. Centered with the women around him, Dante is pointing the fingers of his right hand in the shape of a gun towards a woman directly below him, suggesting both possible violence and the more obvious sexual overtones given the position of his forefinger directly over his crotch. The women themselves in the image are mostly undressed with partial views of their cleavage. All though are looking at Dante, pulling the viewer toward him and his positioned hand through their eye-lines and turned faces.

The image is grotesque. Purposely so, in fact. Though generally lambasted as yet another example of games catering to a straight, white male demographic, the perversion of Madonna-styled iconography is not in the celebration of Dante’s masculinity, but a subtle farce of it. As the game points out at length, Dante is not the celebrated source of virility, but a little boy in a young man’s body. This is no demon hunter or bar owner. He is not a warrior, but someone who drifts without purpose and with very little personal history to guide his actions. He is lost.

Much of the games takes place in the fantastical space called Limbo, serving as both a physical manifestation of Dante’s placement in the cosmology of its world and a larger metaphorical lens of understanding the game’s messages. This Limbo is the in-between place where angels and demons dwell and fight out their endless war. Only those born of either or have undergone prolonged psychological trauma, like Kat, can enter. Dante and his brother Virgil, being born of both angel and demon, can act here. This is where they fight.

Limbo, as the game first shows and later explains, is a reflection of reality. It is both truer and equally more false than its source. Perception is the key to understanding it. If you believe certain paths exist, as one demon tells Dante late into the game, they do. Its construction conforms to both how and why you think certain things. It can be either heaven or hell, all depending on enough souls believing it to be so.

It is through Limbo that DmC makes its own messages about culture and even those who might play the game. Willing to poke fun at those who would idly drink soda without thinking about its effects on their bodies, the game also gladly presents parodies of news networks “Just doin’ God’s work” and corporations with the not-so-hidden motto of “Cash is king.” Later levels quickly move beyond messages to demons to “Stop him” and “Kill Dante” to much more subversive ones. Those directly not to the game world exclusively, but at the player herself too.

The game quickly touches on government surveillance, corporate brainwashing, and political prisoners. Minor plot points and characters represent all manner of subversive representations wrapped up in the fictional package of demon attacks. All of the world’s ills, DmC implies, come not from humanity, which is shown as prominently docile, but “demons” acting out their will on the people. Those in power behind governments and corporations are literally evil in the game. It is their fault inequalities exists, the game concludes. 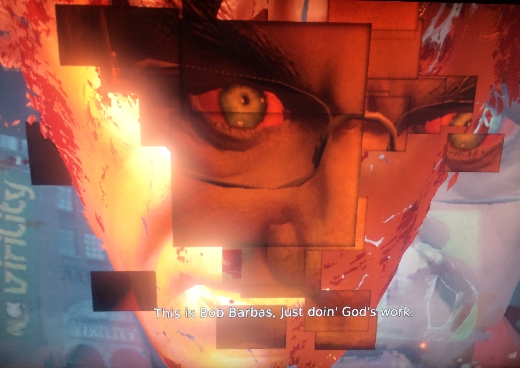 Even from the initial marketing, DmC has reveled in this grotesqueness. The enemies Dante fights are demonic imperfections, incomplete things. Limbo is this parasite, pulling from bits and pieces of reality. Even the violent battle mechanics, often over-the-top in its compliments of sayings like “Sadistic,” points towards this theme. DmC, more than any other game in the series, exceeds its Gothic and Catholicism roots to move beyond horror to pity. The mask DmC wears evokes not fear, but the possibility of understanding.

Dante does not know his role in this strange world of his. As he matures from lost soul to leader, he learns of his past and how he might fit into the future. Coming face-to-face with the corpulent Succubus shows him the cost of overindulgence. His battle with Lilith highlights the road of blind obedience and overconfidence. Even Mundus, grown to the size of buildings during his own fight, becomes the embodiment of pride. Each is grotesque played in a different note. All faintly echoing in in their discordance harmony and whispers of unity.

He cannot side with the demons or the angels, ultimately. Dante must confront his brother, who wishes to remake the world for their kind, the nephilim, too. He has to pick humanity, those who must be defended by others. Combining both sides of his family, the angelic nature of his mother and demonic of his father, Dante struggles to finally know where he fits in and who he really is. After being shown the disturbing influences of power, of how it has twisted others, he is left with weapons but no true identity. All he has left is his name and the will to keep fighting.