The title of No Man’s Sky is supposed to invoke feelings of rugged individualism and vast interstellar freedom. Inviting exploration and spectacle through its procedural generation of solar systems, planets, flora, and fauna, No Man’s Sky revels in the open world, open sandbox, seemingly infinite world feelings other games like Minecraft  have made popular. Yet, invest some time playing (or 80+ hours) and the luster falls away. Sure, No Man’s Sky may have one of the best procedural generation engines ever created. And, absolutely, is it exciting to watch a sunset on another world or watch creatures fly across an alien sky. But there’s a major problem. One that goes by two words: terra nullius.

Latin for “no (man)’s land,” the phrase has been one codified into international law for hundreds of years, and one that carries with it powerful and troubling colonist connotations of what is and is not civilization. Used by occupational forces to ‘claim’ land by first nations and other indigenous peoples, the rule of terra nullius is often one of colonialism run rampant. Through a mere presence recognized by other stronger forces, the use of terra nullius invalidates any previous claims and erases existing history and culture. It is the naming of land away from its origin through force.

Placed in No Man’s Sky, terra nullius is the thematic overture, the message returned to and pointed at from every aspect of the game. Through collection of metals, materials, and flora, the game encourages construction, expansion, and exploration. Building fuel allows for travel. Mining prompts greater exploration. Achievements praise worthy deeds, including traveling more and mastery over existing intergalactic languages. Finding messages point the player to the ever-expanding horizon. Even the star-chart lists the distance between the current location and the galactic core. Everything converges on the idea of traveling and claiming through being the first to visit a location and meet its animals and plants.

Yet, while the game promises the ability to name things, to claim the right of terra nullius upon the galaxy, this is a constantly contradicted myth. There is no “land” to claim. There are no creatures to first name. All plants have names already. Planets have destinations you see when approaching them. In fact, and in direct contradiction to the premise of the game, three (and possibly more, although now extinct) races exist in the galaxy: Gek, Korvax, and Vy’keen. There is no “man” in these skies.

These are not new places. Nor, in fact, is anything undiscovered. Throughout the galaxy, and on every single planet in the game, are knowledge stones, ruins, and buildings. The planets might be previously unknown to the player, but the Gek, Korvax, or Vy’keen have been there before, leaving behind the debris of their own colonist expansions. And in every solar system is a station, and on nearly every station is also one of the primary, remaining races ready to trade with the player for materials or to teach them more of their languages. Economic stability, with raising and falling prices, has made its way to each system before the player, and has seemingly existed long before and will far after.

This is not a colonist narrative. This is postcolonialism at play. The player may be an invader to these spaces, but the knowledge comes from others, from being and maintaining a hybridity of parts, tools, and technologies. Expansion comes not from within, but in using the remains of past and long forgotten imperialist campaigns. Although the player may have the ability to ‘name’ things, everything has already been given a name before her. Technology, mining and traveling between systems, has become so standardized between disparate species as to become ubiquitous and boring. Ships travel the skies, sure, but pirates are the only ones remaining fighting each other. Empires are at rest, happy in their economic trade and causal scientific exploration on planets in nondescript buildings shared across the entire galaxy. 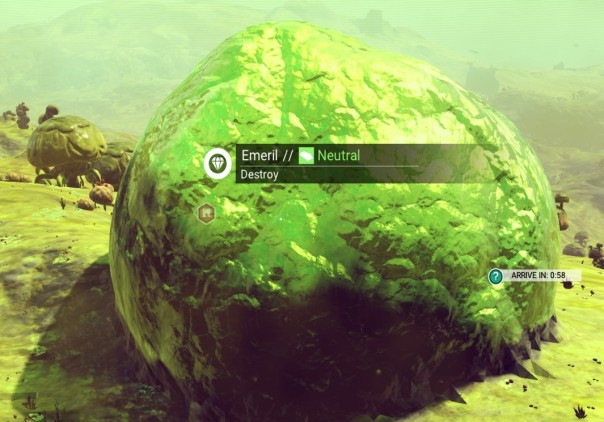 At its best, the presentation of imperialism and promise of conquest is turned inward and transformed as archives are found and knowledge is shared. Aliens are made friends and allies through trade and good deeds. The claiming of land becomes not thinly-veiled colonialism, but feminist archaeology as ethics of care are reinforced through forces fighting off overly-mining areas and in showing the laws of the sentinels who patrol the galaxy, implementing their own laws and viciously enforcing any infractions through force. Something the player can fight, of course, but cannot do so without considerable force in turn, feeding violence against more violence until death.

Without the ability to build structures or make some home for herself, however, the player is forever a traveler among the stars, reaching forward while carrying a history of other worlds, cultures, and languages. Her hyridity, a paradox of strength and weakness for the player, positions her without a land to call her own, or one to return to when done exploring. She cannot rest; she merely pauses. Yes, there are endings of a sort, but the galaxy is ever calling. The archives are always open. There is always more to see, more to collect, and seemingly endless paths to roam.