Ink can be used with Unity, but is best learned with the all-in-one app, Inky. Builds exist for Windows, Mac, and Linux systems.

Go to the releases page and download the most-current build. (For Windows and Linux, open the archive file. On Mac, open the DMG and move the app into the Application folder.) 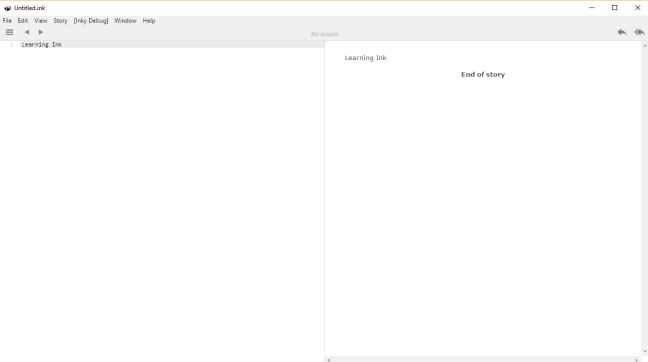 Run “Inky” on Windows and Linux. On Mac, open the App in the Applications folder or Launchpad.

Once open, Inky will display two panes: editor and preview.

The editor pane shows the code as written. It has code highlighting and line numbers.

The scripting language, as written in the editor pane, also has wrap-around.

The Preview pane will show the compiled code moments after it is typed and run by Inky. It constantly updates its contents and shows the most recent preview of how the code will look when compiled for player usage.

The Preview pane will always show the End of Story as well. This is the true ending and is added when an author does not explicitly added it.

The Ink scripting language uses many common terms to describe itself. These are based on the idea of code in Ink being a kind of thread that is spun by an author and “read” by a player.

Flow: The entire code of a project

Knots: Sections of code created by the author

Stitch: Sub-section of a knot

Diverts: a movement between knots using the arrow, “->”.