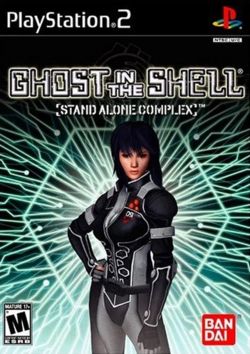 I had been putting off playing this game for awhile now. It is not that I did not want to play, the opposite in fact. I really wanted to play but I did not want to be upset over the fact that more than likely it was not a good game. Surprisingly, I was wrong… for the most part.

Ghost in the Shell: Stand Alone Complex‘s story takes place right after the first series of the popular Anime of the same name and has the same cast of characters. Although, the Major and Batou were the only playable characters for the levels I tried. Including the cast is nothing without decent voice-actors to portray them and this game has them. In fact, it has the same English voice-actors as the Anime that aired in North America so fans will feel right at home watching and listening.

Gameplay takes place from a third-person point of view that allows you see the character perform their basic attacks and signature moves. Playing as Motoko Kusanagi, you are able to make high jumps and fast melee attacks on enemies. When using Batou though most action takes place with guns and brute force attacks.

In addition to the hand-to-hand combat and gun battles, you can ghost-hack certain enemies as well. Pulling a line from the show, after having collected hacking codes from certain enemies or terminals you can ghost-hack or possess certain enemies. The ghost-hacking is not always an easy thing however as a timed mini-game must be played in order to succeed. Success grants you control over that enemy for a limited amount of time that can be extreme helpful in trying to reach a terminal or take out other enemy solders.