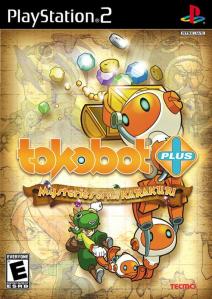 I had fun. Being not that great at adventuring games, I often get frustrated at playing games in this genre. Tokobot Plus: Mysteries of the Karakuri, with its simple puzzles and interesting steampunk visual style, managed to break through my lack of skill and provided a generally enjoyable experience.

The story revolves around Bolt and his little friends. His friends, in this case, are actually little robots called Tokobots. These short, but versatile, bots can be configured to attack an enemy or solve a puzzle. Pressing one of the face buttons, each a different command, causes them to arrange themselves in whatever shape is required. As Bolt explores ancient ruins, for your employer Canewood’s Lab, he gains new Tokobots while sparing with the occasional rival.

If I was pressed to give a grade to this game it would be in the range of Decent to Mediocre. While not a terribly impressive story, it manages to convey what it needs to most of the time. When making a ladder of themselves or a blunt object used to hit enemies, commanding the Tokobots was always fun. I won’t ultimately recommend a buy, but a rent or borrow is suggested for fans of the genre.