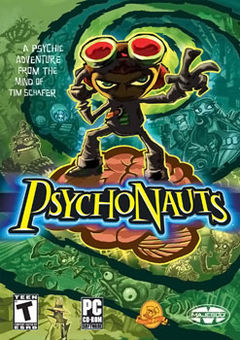 You would think that breaking into a classified summer camp for training kids with psychic powers would get you in trouble. But for Raz — short for Razputin — it turns into a conspiracy-unraveling mind-bending adventure to become a Psychonaut before his parents show up to take him back to the circus. (Yes, he ran away from circus life.) Testing his own psychic skills while he waits for his parents to come gives Raz a vision of someone stealing the brains of the children at the camp. Upon recovering from the test he learns that his vision has started to come true! In order to pierce this mystery of the missing brains he must journey into the minds of others and seek out the phobias that plague them, often fighting with manifestations of fears to get to the truth.

To say that this game is unique is a bit of an understatement. With a visual style that could only be described as bizarre banalities and voice acting that gives even the lowest bit character a real presence, this game stands apart. You can expect to go from laughing at one moment to marveling at the strange inner worlds of the members of Whispering Rock Psychic Summer Camp the next. From using a trapeze to jump between fighter planes to ball-bouncing in a disco race, this game demonstrates how great platform games should work.

Highly recommended for those that love a good story and might have overlooked this hidden gem. Look for it on Steam, GameTap, Xbox Live Originals and the PlayStation 2.