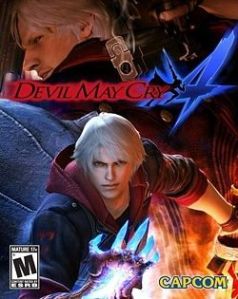 The Devil May Cry series and I have a bit of a history. I was excited to play the first game but upon not being able to defeat the boss on the third level, I stopped playing completely. Despite that experience though I bought a copy of the second game and played it for a couple of hours. I ended up reviewing it more favorably than the original due, in part, to the fact that I was able to play more than the first three missions. For whatever reasons, I missed out on the third game. Hearing about this latest version had me at varying opinions. On the one hand I wanted to try another game in the series. On the other hand, well, I didn’t want a repeat of my first experience. Lucky, it did not disappointed… mostly.

You start as Nero, a punk that despite his anti-authoritarian attitude still manages to make it to a church service. This service is different from a traditional service though in one major way. Here they worship Sparta, the demon that turned against his brother demons and closed off the Hell dimension from the Earth one. We soon find out that Nero has affections toward one of the singers there, a girl by the name of Kyrie. After her song, they sit together in the audience while Nero fights with wanting to leave during the sermon. As Nero finally gets up to leave, a wrapped box that was a gift for Kyrie falls out of his coat. Picking it up from the floor, Kyrie begins to open it. Before she can remove the golden necklace from the box however, Dante – the main protagonist of the Devil May Cry series – appears and murders the priest. Things get messy, fast.

Seeing Dante as a threat, Nero attacks him. If you selected to have the tutorial turned on, this serves as a training area to test out Nero’s basic attacks on Dante. Eventually, after having broken almost everything in the church, the battle ends up in a draw. Dante departs, but not without leaving Nero with questions about who exactly he is serving in being a part of an order that worships a demon. Leaving the building, Kyrie gets kidnapped and Nero charges after her, killing everything in his path. This is how the journey starts to figure out who, or what, is behind the kidnapping of Kyrie and what role Dante plays in the whole mess.

I really loved the first half of the game. Playing as Nero is fun. He has a few of the basic attacks Dante had in the previous games. Switching, on the fly, between guns or a sword is back, as well as enabling the Devil Trigger to give added attack power for a short time. The big change comes in the Devil Bringer ability. Since Nero’s arm is demonic, he can extend it, in a sort of astro-projection way, to either pull enemies toward him or pull himself toward them. This gives him a unique fighting style that is quite different than Dante’s. Many combo attacks have part, if not all, of the technique consisting of pulling an enemy toward you. Once there, then you either throw them in the air or slam them to the ground depending on the attack. Midway through the game that changes.

The player switches between playing Nero to now playing Dante. This is where I started to dislike the game. Once you get to Dante, not only are the attacks and techniques different but all the areas are repeated. Each area that you progressed as Nero is then played through, in reverse order, as Dante. Once you get used to playing as Dante – which took me about two missions – it is easier but the repeated levels are still annoying. Added to this is the fact that each boss that was defeated as Nero must now be vanquished, again, as Dante. You can see how, after spending several hours exploring each new unique area as one character, it might feel frustrating that despite a new character the backgrounds are the same in most of the second half of the game.

The traditional upgrade system is different than what I had previously used. Instead of using red orbs – left by killed enemies or found in hidden places – to enable more advanced techniques and attacks, Proud Souls are used in their place. These Souls are gained at the end of each level by grading how the player acted. Using more advances attacks to rack up high style ratings and limiting the use of healing items adds to this score. The Red Orbs are not ruled out completely though. These can be used to buy healing items from a store before each level and from statues found in later levels.

For fans of the series I may not recommend this. I liked it. The reasons I liked it though was because in many parts it was easier than the first two games in the series and I was able to progress smoothly. I was even able to beat it without a single Game Over. That is saying something considering my record of dying continuously on the first game’s third mission. There are harder difficulties too. Along with Human mode -which I played through the game on – there are three more, with each one unlocking after finishing the previous. After my positive experience on the game I’ve been thinking about playing the other, older, ones again. I’ve even been thinking about giving Devil May Cry a second try, in the hopes of writing a better history.