It’s weird that I didn’t know it was going on considering all the research I did last year for my work on Lurking Shadows, but it turns out there is a yearly event called 7-Day Rogue-Like. The goal, as you might imagine from its title, is to create a Rogue-like in one contiguous “168-​​hour period” using whatever tools, libraries, or platforms you want. Like many other game jams, the rules include that you disclose what you use and, hopefully, write about your own journey as you work.

I didn’t exactly fulfill the second rule, which is why I am writing about it now. I’ve been working more lately and my sleep schedule has become highly erratic. Plus, after spending many long hours editing other’s work and then following that with very late nights working on code, I haven’t wanted to do much of my own writing. However, with me officially stating that I’m done with the jam, I thought I’d finally get around to including some of my thoughts and, yes, showing off the work I did too.

Before I get too far though, I want to praise rot.js. While it might not be as obvious looking at its code on GitHub, there is some amazing algorithm work included in that project. As someone who has created my own dungeon building algorithms (I have both a “Tyrant” dungeon variant and a cellular automata one I’ve used in the past), I was highly impressed at the speed rot.js was able to achieve using the same basic ideas.

(To see just as fast they are, compare the time it takes my code in Lurking Shadows to run versus that in Distant Echoes. It’s the same algorithm, but Rot’s implementation of it is way faster. And we are comparing Flash to in-browser JavaScript speeds too!)

As I think I have mentioned before in other places, I often key to a word or phrase as the germ of an idea for a future project. Such was the case with the phrase “distant echoes of ancient lies” in respect to world-building. While I couldn’t seem to find where I thought I heard it from recently, it’s been struck in my mind as a way to describe how myths change over time.

They start from some seed event usually based in reality and, over time, bloom into something else. Start to think about The Epic of Gilgamesh, The Iliad, or any other ancient work and you will get the idea. Over time, the stories change due to the teller, context, and even the culture in which it is presented until it is finally written down and canonized.

That got me thinking about my own pseudo-cosmology I’ve been connecting across my various projects and how, if I jumped into the future from one of the events, I could cast it as myth. Like, what if Quentang or even TV Fred became myths? How would that play out?

With that premise, I wrote out how I imagined a ritual would work in a world where, after the machines fell — and those few left killed humans to maintain this secrecy — the humans praised the one machine that, according to them anyway, was “not evil”. Naturally, they would have named her — gendering robots is something I’ve played with several times now and is always interesting to me — and set her up as their savior. 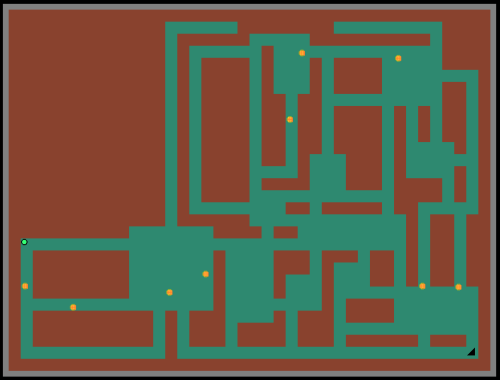 The story of the game, since I’d already told the player they would “win” anyway, allowed me to continue a trend that probably has a better label already but which I personally call “incidental games”. It’s those like Meow Escape and Run Dan Run where the “game” part is completely incidental to the greater story. It’s reading along and then, in the middle, there’s this game bit. It’s part of the package of the whole entity, but holds equal importance with the overall arc in the story. It’s an approach to games I’m probably going to continue playing with this year in other upcoming projects.

Once of more interesting turns of this project though was that, since I missed my deadline for weekend writing on Sunday, I decided I should probably wrap this up and get back to making my various tutorials. However, in deciding that, it also meant taking out everything that didn’t quite work, including the “death” mechanic I had been working on up to that point. The result is that it now became impossible to “fail”: collisions with the other machines merely decreased your overall speed.

This now meant, if the randomness of the game made it too hard (which happened during my playtesting of it), such an outcome worked toward the story. It wouldn’t work to have the hero “die” in the middle of the adventure, so now she kept going, only getting slower each time. Eventually, and this is what I purposely tried to evoke on the last level, the speed is so slow the player must “push” the Green Warrior to the core to end the story finally.

Any sort of perceived failure on the part of the player in dealing with avoiding the machines translated (hopefully) into an understanding of the situation with the last screen of text. The myth being told reinforced the “epic endurance” of the hero in question: even with her power failing, she still made it to the core and initiated the Fall and Last Days. The only way for the player to not “win” was to give up completely.

Although I doubt this is much of a surprise to those who have known me for years now, I’m prone to bouts of depression. It’s not uncommon for me to work until 2 or even 3 AM, drive home, and then have dinner by myself before going to bed finally and repeating the cycle once I wake up again. Compounding this weird sleep schedule is the fact I often don’t eat while I’m at work.

So, you can start to imagine how a few days of being hyped up on caffeine, low on sleep, and with a constant headache from spending up to 12 hours in front of a computer at a time might make me, once I do get some time to create, frustrated at my inability to make anything “interesting”. Which then adds to the depression spiral once I spend my nights (read: mornings) looking at the writing, games, and even videos others have done.

That’s where this game came from for me. Yes, I know it’s not a rational jealousy. I should be happy with my own work and glad so many others are creating wonderful projects. But sometimes I just can’t be. It’s all I can do to avoid my own triggers as I go from one site to another.

eDepression is probably the closest I’ve ever come to a personal game too. It’s not a genre I am comfortable with, having been taught throughout most of my early life to always put others over myself. In fact, even as I write this, I feel a very strong compulsion to pull it from my site because of how autobiographic the introduction especially is for me. 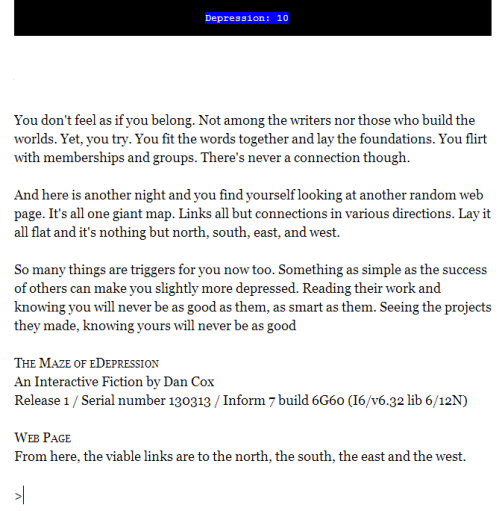 It’s all random too. There are 15 rooms that are randomly connected each time the game is run and a chance of certain events happening after moving to a new one each time. And like other Rogue-likes, the story can end if you aren’t paying close enough attention to what is going on and where you are.

Just like depression outside the game, one of the best ways to break the spiral is to go “up” and out of the situation. Gaining some perspective on the problems can often show that they aren’t as big as you thought they were initially. Taking time to step away from the things that trigger you can often prevent you from being lost in the maze.

2 thoughts on “#7DRL: Distant Echoes of Ancient Lies and The Maze of eDepression”