I think I have everything figured out now. I can transcode and down-vert the files, but it will take a very long time — probably 12 hours or more each. So, what I have decided, then, is to finish recording the entire playthrough and then post the files next week once I have processed them all. That is a bit of a let down overall, but given the computing resources I have, it is the current best option.

In the meantime, what I thought might be neat as we all wait for those files to finish would be to post the length and starting times of the sessions I have. To that end, I have taken a screenshot of the recording program and what the three sessions look like now. Notice, I’ve been trying to extend my playing time by at least one hour each new session: from nearly seven, to nearly eight, and now, almost nine hours. Continuing the trend, and assuming I can put up with it, I will have to log around ten hours at least when I start playing tonight into tomorrow morning.

I knew there was something about the camping trip I remembered disliking and, once it happened again, I instantly went, “Oh. Right. This crap.” It was, as you might imagine from my title of this subsection, about Yosuke. It’s about the attitude of both him and ‘the protagonist’ (as many guides and even Wikipedia delightfully calls the playable character) toward Kanji and then Chie and Yukiko in the next scene.

The first conversation, if you have not seen this section of the game, goes somewhat like this.

Yosuke: Kanji, I want you to be honest with us; you are one of ‘those,’ right?
Kanji: What!?
Yosuke: ‘Cause if you are, I want to know if you are going to molest us.

That’s right. While it is underplayed slightly, Yosuke is worried that Kanji, as a not-quite-open queer character, might molest or potentially rape the other male characters. They cannot trust their bodies with him, the game hints at, because he is a “pervert” (i.e. queer) and capable of “anything.” Because he “likes the company of men,” he may let his desires get the best of him and… well, you know how ‘those people are,’ the game fails to complete the thought.

And then, of course, is followed directly by Yosuke essentially conning Chie and Yukiko into striping for him.

Having come to the river, the group discusses going swimming. The two girls of the group say they have not brought swimsuits and thus cannot join the guys. Yosuke, ever the creeper, has brought swimsuits for them. As he says, we ate the food you made for us back at camp, you owe us this (your bodies).

The girls, after agreeing to change clothes, are finally pushed to their creeper limits by Yosuke comments when they come back undressed. They push Yosuke and ‘the protagonist’ into the freezing river water with Kanji watching all of the events unfold.

Having been mostly silent through this whole exchange, the girls now turn to him to get his reaction to the comments and the dialogue screen, in response, shows that Kanji has a nosebleed (is aroused). The girls push him in too.

What is problematic about the exchange with Kanji is this: the game is not clear if seeing the guys in bathing suits in the water is what was arousing for Kanji (the character is looking in that general direction) or if it was the girls with their bathing suits. He is generally looking away from the girls, but the character often admits he is “uncomfortable with girls” too. I am not certain what the game is shaming here: Kanji’s male gaze on the men or the one on the women. Either way, though, with the “pervert” response of public arousal (the nosebleed), he must be punished and is pushed into the water. 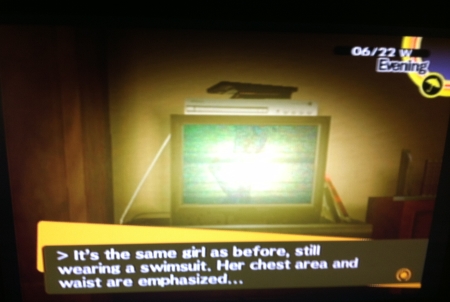 This was the main section of the game I played through during the latest session. All about Rise “baring it all” by being a female celebrity, it has, as all dungeons in this game have, some small redeeming qualities mixed in with all the rampant misogyny. Most deal with Rise as a a subject to other, mostly male gaze though.

The paradox presented by Rise, as a character who sells items while in a swimsuit, who can also perceive, even without the fog-penetrating glasses, the inner qualities of those around her is an intriguing one on face value. While all “others” are looking at her, she is clearly seeing both through and at them. She is able to pierce back through the screens layered on her by others and can analyze them as they look at her.

However, it also leans into the “stripper with a heart of gold” trope by presenting her “pure and clean” response to everything in the face of her perceived values as a “loose” woman by being a female celebrity who sells things with her body. Everyone else thinks she is “easy,” but the game has her respond to things in a nearly innocent way. One that tiptoes up to the line that she might not completely be aware of her body and how it is presented through the commercials she had been in before this point.

Persona 4 frequently does not do a good job of empowering its female characters in this way too. It often wants to show them having strength and standing on their own, but too often undercuts completely any message of self-realization and individuality by having ‘the protagonist’ or other male characters derail or, in the case of Yosuke earlier, degrade them. I have hope something will change each time a new section comes around, but then, inevitably, am disappointed by what the game ultimately does.

I had this written down as a topic to expound upon as part of each day’s session but haven’t taken the time to do anything on it yet. So, let me take some space here to write that one of the most subversive and also fascinating aspects of the Persona series of games are the titles of techniques and especially enemy naming schemes. All of them hide a richer thematic tapestry than I think many people give the games credit for. However, because they represent the mechanics on a lower level, I have found, and this does include me too, they are often overlooked completely.

Now, I noticed this trend in the first dungeon, actually, but it had slipped my mind until I saw the enemy type appear again this morning. See, when I came across an enemy type that looked like a King in Yukkio’s Castle initially, I saw that, when not defeated quickly, he would use the “Summon” command and bring in reinforcements. The new enemies brought in all had the name “Secret Bambino” and were of a different color. While the King was white in complexion, the reinforcements were not.

This presented a narrative to me that the “white” King was having potentially mixed race children, these darker in texture ‘hidden infants’ (“bambino” being Italian for ‘child’). They were then used as weapon fodder against his enemies. Instead of fighting directly, he would send out the most expendable of his family, those of ‘mixed blood.’

It is a surprisingly dark presentation of the feudal systems of kings producing lots of children and then sending those “unworthy” off to war to die. And especially in a game like Persona 4 with its fluffy j-pop and upbeat tempos, it is very easy to overlook all of this too. Battles often go by very quickly and the enemy names flash once as selected before they quickly perish.

Yet, I am finding that if I pay special attention to their names, I am seeing smaller melodies to each area’s greater harmony. Kanji’s area had muscular enemies, mostly male in presentation. Yukkio had those kings. And, with Rise, the enemies all had one overwhelming weakness that, when found, made them quick to finish — they needed to be analyzed first.