(It increasingly seems unlikely that I will finish Persona 4 within the next two days or so. Even though I invested just over ten hours in the last session and am planning to do that again when I start tonight, I am doubtful I will come to the end even after 20 more hours. Sure, maybe I will, but I think I am at around 30 hours currently and, even at 50 hours total, that doesn’t seem like it will cover the predicted 85 it took me to finish Persona 3.) 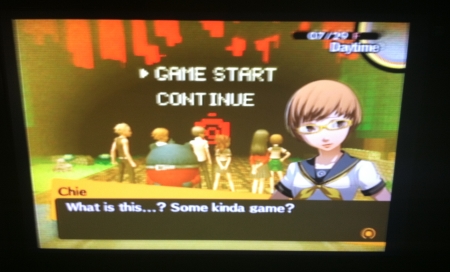 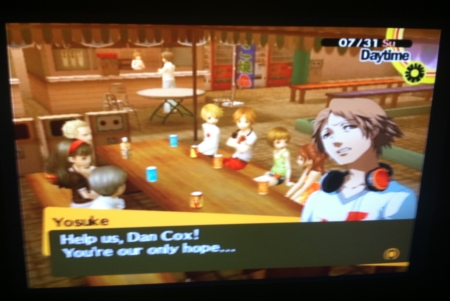 I was originally going to call this section “Shadow Mitsuo is bullshit” because that was how I felt when I played through the Void Quest dungeon in this last session. For as much as I praised the game in my last recap for matching the battle mechanics to its associated dungeon’s thematics, physical attacks for Kanji and analyzing enemies for Rise, I felt I was basically just hitting my virtual head against the wall of the game’s battle mechanics to get through the section. Instead of being able to approach the area’s enemies and boss in different ways, I was having to find the one — and seemingly only — way to get through them.

Part of the problem, I know, is in translation. The Persona series has a very specific set of attacks and techniques. The naming schema is one, I assume at least, that has been passed from one game to another and now, in the fourth in the series, are just the way things are. They are the labels of the methods and, as a Western player, I just need to learn which things — Agi-* for fire attacks, for example — match to which effect.

It is not too different, I thought upon some reflection, than how the Final Fantasy series has it own bizarre set of verbs. Depending on the game (and often its age), some spells have suffixes like “ara” or “aga” denoting their attack strength while others have numbers after them. Then, depending on other factors, the techniques do different combinatorial effects. Things like Vanish + Doom, I remember from one of the earlier games, was a quick way to kill off enemies.

The Persona series has these same little quirks, I’m now remembering. And while playing Persona 3, I re-remembered this morning, I had written out a cheatsheet that mapped the attacks and status effects in the game to how I thought of them from other games. I’m probably going to have to do that again at some point.

The Other ‘L’ Word 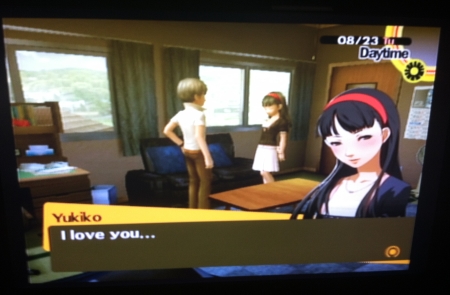 While I was playing this last session, I was listening to, among a long list of episodes from different shows, You Made It Werid‘s latest episode with Mike Birbiglia. In it, Mike makes an observation that Pete (the host) might be experiencing “intimacy jealously” in relation to Mike and his wife. Pete, it seems, calls them for advice on occasion and had done so fairly recently for how to handle a new situation with a woman he had slept with after breaking up with her at some point earlier.

In the episode, it was used as a little bit of dig against Pete but, for me, it became personal as the talk on the phrase happened around the same time as the above screenshot. Yukkio had confessed her love for ‘the protagonist’ and, in classic “gamer” fashion, I was experiencing a deeper false intimacy than I had at the time. Here I was at, I think, around 5 AM some time playing a game where relationships are reduced to short sequences and numbers. Yet, I was personally angry at the ability of ‘the protagonist’ to progress so many complex relationships between people, including this romantic one, while I hadn’t communicated with another person for upwards of eight hours, and haven’t spoken to more than a couple of people for the last several days.

There is a strong argument, I know, against these types of puzzle box relationships, and often this culmination in “sex” or, in the case of the Persona games, a technique that helps in battle is disgusting toward the other people involved (reducing them to objects to ‘figure out’), but I could not help but to think how convenient it would be to be able to measure a relationship in such a matter. To be able to seek forgiveness through ritual or know to some certainty your personal standing among others — faction points for a community, as another example — has a very strong appeal to me.

It is probably rooted in my Protestant past, I imagine. That somehow showing your “works” demonstrates a deeper faith and spirituality. The more you do for others, the more your corresponding “worth” to the community. If you have a talent, you must use it; to do otherwise is a sin.

Seemingly in Persona 4, this is reversed. Everything is about “you” and, at least my perception of it anyway, is outward facing. The game even uses the terminology of a ‘facade,’ a not-quite-real face, you wear to combat life’s hardships. You wear this mask for this group and another for this other. Group belonging and perception as producing self-identification is a major theme. ‘You’ are a composite of your memberships and how they feel about you.

I watch anime sometimes in my free time. Not a lot, mind you, my free time is fairly limited and I like anime better in larger chunks of time, but I have been recently enjoying discovering new shows on Netflix and Hulu on occasion and watching through them. And while I haven’t actually looked this up, although probably TV Tropes would have it, upon seeing the festival events in Persona 4, I was struck at how like a trope it seemed to me.

The fact that Teddie, in his way, ‘hung a lantern’ on the whole thing pretty much sealed it for me. He comments that it is tradition that couples walk around together at a festival and, since they are moving as a group, they should bring into pairs. Naturally, since this group is fairly dysfunctional in everything but battle — well, with me leading them, in that too — they all fail to break into smaller units of equal size; Teddie walks away with the girls by himself.

I kept wondering if, when making the game, the designers decided that, since the game’s setting is a small town, they needed to include this. That maybe it was a requirement for all stories that include both couples and small towns. Gotta have them go to a festival at least once. It’s a must.

As with the festival scene, I was confused about the inclusion of watermelon day for… reasons, I guess? I don’t know. It didn’t make sense to my understanding of either Japanese customs, which is admittedly not great, nor than of Western events. They just spend a day eating watermelon.

Yeah. I don’t know either.

For a game rich in other symbols and even mythology lore, I could not decode this scene. Maybe it is about togetherness? It is the fruit of their victories? Nothing other than puns really made sense to me here.