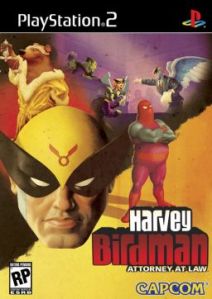 I was excited to hear about this game. “Ha! Ha! Birdman!” I thought to myself. I was ready to embrace the wacky humor of the hit cartoon Harvey Birdman: Attorney at Law in game form. Once I got my hands on it however, my attitude changed.

I first tried out a demo version on the PSP. I had signed up with the PlayStation Store to pick up a demo of this game, as well as Patapon, to finally try out. I had heard some early whispers of reviews. Some had said it was reminiscent of the Phoenix Wright series of games on the Nintendo DS, which were getting high praise at the time. I was noticeably disappointed then to learn that I could not beat the demo.

It’s not that I didn’t like the demo, I did. I enjoyed watching the characters act out my whim as I tried out every little, and sometimes nonsense, clue and theory. Hearing the all of the voice actors from the show in the game, including my personal favorite Mentok the Mind-Taker, was great. After failing to put the right clues in the right order several times, often with humorous results, I failed the demo. The I failed it again. Then a third time. It was then that I thought I might just try a different game.

When I found out that I could get my hands on a copy of the game for the PlayStation 2, I got excited again but with a heavy dose of skepticism. Surely the full game, on a different system, would be better than that demo? It turns out, not so much. I quickly learned that the demo and the full game are the same. The demo I played was thrown right back at me as the second case after a simple first case that served as more of a tutorial than actual challenge.

You might like this. I didn’t. I enjoyed the humor. I liked the cameos. I loved the voice acting. I just could not understand the nonsense plot. Sure, the idea is that it is not supposed to make sense. The cartoon strived to make as little sense as possible, to great comical effect. A game however needs to make sense. I did not feel this game did, or at least, not in a way I was able to easily figure out.