In Ren’Py menus are central to how in-game choices are presented. By choosing one option in “The Question” (shown above), the player is moved (jumped) from one section of code to another.

Open the “script.rpy” file from “The Question”. 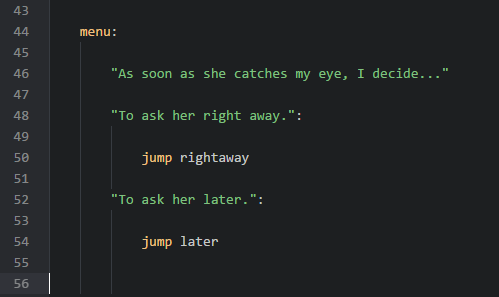 The keyword menu, however, only works in the above example because because it is part of two other keyword functionality: labels and jumps.

Code in the “script.rpy” file of a project in Ren’Py can be divided up into sections. These are called labels.

After characters are created and other initialization tasks are complete, Ren’Py starts a project at the label start. In the “script.rpy” file of “The Question”, this is line 12.

Labels are also be found in other places and with other names.

For example, the label rightaway is found on line 57. It is the beginning of a new section of code and immediately follows the previous menu code. In “The Question”, it is the first of two possible paths from the in-game choices.

It is accessed through another keyword, jump.

The jump keyword is used to move from one label to another. It “jumps” to that new section of code.

In “The Question”, it appears first on lines 50 and 54. Depending on what the player chooses, they are “jumped” to either the label rightaway or the label later.

Removed from any code, Ren’Py would “read” the project start to finish depending on the order of the code in the file. With using the keyword jump, projects in Ren’Py can loop, branch, and create new paths.

The menu keyword can be used to create in-choices. Through using existing labels, a player can be moved (jumped) from one section to another.

— and again on lines 100 – 111. Each use the menu keyword is combined with the jump keyword to move the player to different labels.