Used throughout the examples in the screen language and position style properties sections, text has the most ability and extendable options. It supports escaping characters, interpolating data, and styling using tags.

Commonly escaped characters like the double-quote, “, and single quote, ‘, can be escaped through using the backslash with the character within the text. 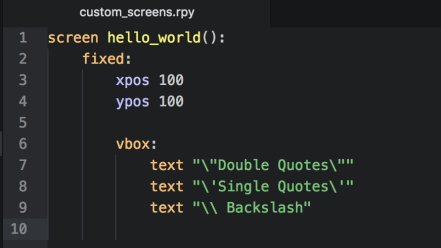 Text in Ren’Py supports the ability to show the value of a variable. This is called interpolating.

Through including brackets around the name of a variable, its value will be shown

Style tags start with braces and then are based on their letter or special keyword. They affect the text between their owning and closing usage.

A button is one of several different types of interactive elements in Ren’Py. Like other elements, it is defined through different style and interactive properties. (Created buttons can also use the built-in styles.)

Unless otherwise set, buttons will not react to user input. Using the hover, idle, or selected properties can help set the exact interaction wanted.